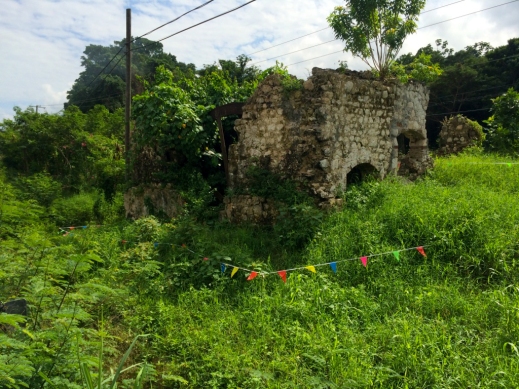 Our Visit to the Drax Hall Great House

Bonita and I were on the hunt for the Drax Hall Great House for two weekends. The owners of every store, apartment building and hotel in the neighborhood of the great house named their establishment Drax Hall…something. We found that villages and neighborhoods assume the name of the original estate or great house. There is a plethora of towns named after the great house or pen house such as Amity Hall, Brown’s Hall, Carron Hall, Dean Pen, Fellowship Hall, Giddy Hall, etc., whether or not the great house or pen still exists. The names give us a target area to look for great houses but on the other hand may send us on many a “wild goose chase.” Finally, we discovered that all that was left of the great Drax estate was the ruins of the water wheel for the sugar works.

In 1669, William Drax founded the Drax Hall Estate. Drax came to Jamaica from Barbados. Upon William Drax’s death in 1691, he passed the estate on to his son, Charles Drax who owned the estate until he died in 1721. William Beckford acquired Drax Hall Estate in 1722 from Samuel Reynolds, Charles Drax’s brother-in-law. William Beckford’s acquisition of the estate initiated a period of nearly 60 years of absentee ownership, first by Beckford, until his death in 1770, and then by his son William Beckford, owner from 1771 to 1821. The senior Beckford was said to be the richest planter in Jamaica. At his death, he owned nine sugar plantations and was part owner of seven more as well as nine cattle pens and a house in Spanish Town. (In a latter blog, I plan to report on the system of absentee landowners and their representatives left in charge of the estate known as their attorneys. Many times the owner’s foreman lived in the great house and never the owner.) In 1821, Drax Hall passed from the Beckford family to John H. Pink, who died in 1841. The Sewell family later purchased Drax Hall Estate.

Because Drax Hall was founded as a sugar estate, it’s not surprising to see that the property also features an impressive and well-preserved water wheel that drove two stone rollers. These rollers crushed the sugar cane and out flowed sugar juice. Heating this juice produced sugar, which remained after the liquid evaporated. The water for the wheel flowed from a dam on the Saint Ann Great River, which marked the western edge of the estate. The water wheel greatly boosted the productivity of the estate. Although Drax founded Drax Hall as a sugar plantation, subsequent owners switched to bananas and cattle in the 1880s and coconuts in 1905.

An 18th Century View of Drax Hall Estate. St. Ann, Jamaica in 1765. It shows the original 18th Century Great House on the hill overlooking the Sugar Works. From a Manuscript Plan of Drax Hall Estate surveyed by George Wilson in 1758, which includes a later pictorial cartouche dated 1765. Collection: The National Library of Jamaica, Kingston, Jamaica.