The good folks of Hampshire Great House directed me to Swanswick Great House, which was on a hill overlooking the Clarks Town. I turned left (south) off the paved road (B-1) and wound up the hill to the great house perched on top. Here another employee of Everglades Sugar Company met me and gave me a tour around the property. It is a two story house with living quarters on the second floor and an attached kitchen to the rear (unusual for colonial times). The kitchen was the same level as the house, built on pillars. The house is painted white and the roof has been replaced with corrugated metal. There is a large set of stairs in the front to the second story and a verandah across the entire back. One has to cross the covered verandah to access the kitchen. It is obvious, by a damaged wall that the builders constructed the house with timber supports, filled in with rock rubble and then they applied a coating of stucco.

Clark’s Town Township was a part of Swanswick Sugar Estate, owned by Mr. G. H. Clarke and from whom it derived its name. In fact, the Clarke family owned the whole of that area. Edward Clarke owned Swanswick; G. H. Clarke owned Long Pond, Hampshire and Mahogany hall and Sir S. H. Clarke owned Hyde. All these properties adjoin each other and my assumption is that the Clarkes were all related. These belonged to the Hyde-Clarke family of Hyde Hall in Cheshire, England, and Hyde Hall, Lake Otsego, New York. The Hyde-Clarke family continued to own Swanswick and Hyde plantations in Jamaica until as late as 1863. The plantations in Jamaica seem to have been originally owned by the Hon. George Clarke (1676-1760), who was Royal Lieutenant-Governor of New York from 1736 to 1743. He was the son of George Clarke, Esq. of Swanswick, near Bath, in Somerset, England and went out to New York in 1703, returning to England briefly in 1705 to marry Ann Hyde, the heiress of Hyde Hall in Cheshire, who was related to the Earls of Clarendon and to Ann Hyde, wife of King James II of England, the mother of Queen Mary and Queen Anne. Returning to New York, the Hon. George Clarke spent the next 40 years in America and established a vast estate of several hundred thousand acres in upstate New York, which he named Hyde Hall after his country estate in England. He eventually went home to England in 1745, with a fortune of 100,000 pounds sterling and, dying in 1760, was buried in Chester Cathedral. George Clarke’s elder son, George Hyde Clarke, inherited Hyde Hall in Cheshire, England, and his younger son, Major Edward Clarke (1716-1776), inherited Swanswick and Hyde plantations in Jamaica, and came out to Jamaica, where he married, about 1742, Elizabeth Guthrie Haughton, the daughter and heiress of James Guthrie of Auchindown Castle Estate, Westmoreland, Jamaica.

George M. Clarke gave the land for a mission near Swanswick and soon the congregation swelled so that in 1838 an Anglican stone church building was erected. This Church, built entirely of stone of the very best quality, has accommodation for 600 persons. The architecture is the old fashioned type, a miniature of the Falmouth Parish Church. The chancel, though small, is very artistic with stained glass depicting the saints. On entering this Church, one experiences an atmosphere charged with religious fervor for devotion. The church was originally named Swanswick Church but later the name was changed to Saint Michael’s which it is called to this day. On the walls of St. Michael’s will be found Tablets in memory of some of the illustrious departed. The first was George Marrett who died at Ashton Pen on 25th May, 1851. Aged 63. His sister, Sarah Marrett at Forrest Estate, October 1856, age 68. Charles Clarke at Falmouth in June, 1858, age 34; Paul King in 1859. Age 55. William Dalrymple, M.R.C.S., London, 1860, age 57; John Wilson, 1878, age 39, and the Hon. Leicester Colville Shirley of Hyde Hall and Etingdon, Custos, on the 21st October, 1914. Age 78. 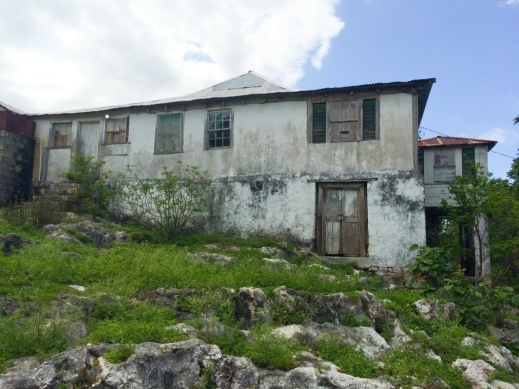 Mike Schwartz told me that in order to get to the Potosi Estate I needed to turn on the marl (weathered limestone) road and follow it to the River Bumpkin Farm, an adventure concession owned by Sandals Resorts. I made my way down the five kilometers to the adventure company and was then told that they couldn’t give a tour of the Potosi Estate but if I could come back tomorrow, they would be glad to help me. I told the office girl about what I was doing and she suggested I go look at Hampstead Great House back on the same road. I back-tracked to the great house and there I met Paul Robinson who gave me a tour of the exterior of the great house and the sugar factory.

Hampstead was a property owned by Jane Stone who was a slave and became the wife of Jonathan Barnett who owned the Barnett Estate. She also owned the Retreat Estate nearby the great house. The Retreat sugar mill (I will cover it in another blog) ran using a water wheel on the Martha Brae River. The Hampstead sugar mill ran by cattle power. In 1850, the owner consolidated the two mills at Hampstead using steam power. At the time of emancipation, the estate had two hundred slaves.

The great house is remarkably nondescript. At the time, it was a really great house, but today, I’m afraid that it would be considered a middle class house. I drove to the top of the hill and as I started to take pictures, Paul Robinson, the caretaker, met me. He was unwilling to let me enter the house but gave me a first class tour of the property. We viewed the original kitchen outbuilding with a brick baking oven, as well as the barracks, where the house slaves lived. We then left the top of the hill and drove down to the ruins of the old sugar mill and rum distillery. I saw the furnace that both boiled the cane juice as well as made steam to run the steam powered mill. He also showed me the well, the water tank, the factory pond and the ruins of the building where the sugar was processed.

In order to get to this great house, take the Martha Brae exit from the north road, drive through Martha Brae on the way to Perth Town and follow the signs to the River Bumpkin Farm (to be described in a later post). Turn off the paved road, at the River Bumpkin Farm sign and about a mile up the road, you will see a coconut plantation on the left and a narrow track up the hill to the great house. 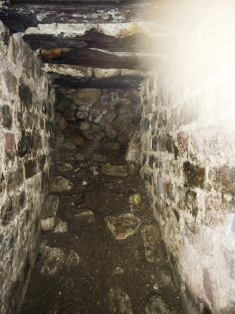 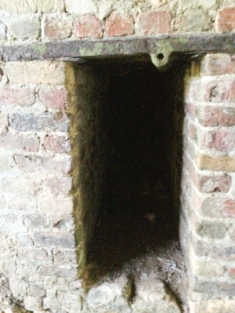 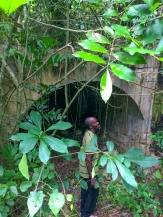 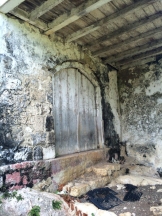 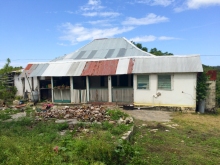