Landhuis Groot (large) Santa Maria, near the village of Soto on the island of Curacao, is on a hill, opposite Landhuis Klein (small) Santa Martha. Dutch colonialists established the plantation 1696. The plantation was famous for its cattle, sugar, rum, indigo and divi-divi pods. They built the landhuis about 1675 on the 1,369 acre (554 hectares) plantation. At the end of the nineteenth century, the plantation was noted for its export of fruit, cattle and the production of ninety percent of the island’s salt which was extracted from the nearby Santa Martha bay. 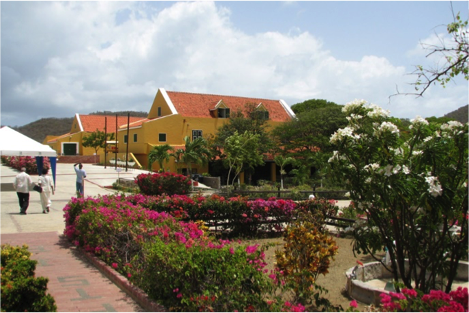 The house is built of coral stone and rubble plastered over with lime mortar. The triangle fronts are unique on the island. The gable roof is covered with red Dutch tiles. The house is painted yellow ocher with white trim. The house is U-shaped with a patio in the “U” at originally was enclosed by a fence. The original statue of Saint Martha is still in the courtyard. It is unknown who were the first owners of the plantation but Director Jan Donker ran the plantation from 1673 until 1709. The other owners were:

The plantation house now serves as a care facility for people with physical and/or mental disabilities and their products they make are sold in the shop. 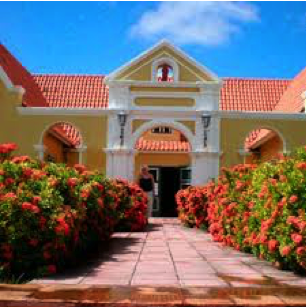