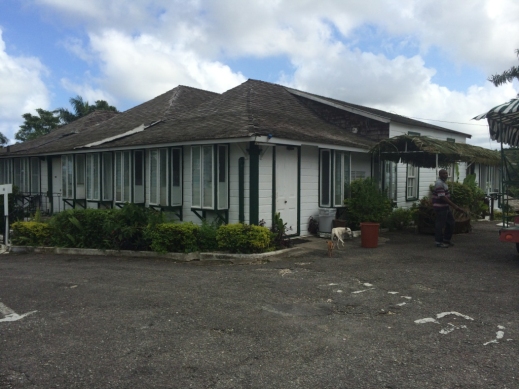 Our Visit to the Brimmer Hall Great House

Today Bonita and I toured a great house worth visiting if you want to experience a working plantation. We left our house in Kingston at 8:45 AM and after an hour and a half drive on winding roads due north on Highway B3 and later A3, we arrived at the Brimmer Hall Great House. The road off A3 is a bit tricky to find as are most places in Jamaica. In the town of Trinity about 10 kilometers south of Port Maria, we turned east at the Epping gas station, bearing left at the junction in Bailey’s Vale. We followed the road and after crossing a rock and concrete ford, turned left through the main gates.

Zachary Bayley owned Brimmer Hall, Trinity, Tryall, and Roslyn. These 4 contiguous plantations comprised 4,000 – 5,000 acres. It was one of the most profitable plantations in Jamaica because of the richness of its soil, the closeness to a port, and ample rainfall. It employed approximately 1,100 slaves, housed in barracks scattered over the acreage. He built the great house in the 18th century. The first and main source of income was sugar, which reached 1,450 hogsheads (1 hogshead = 1,600 pounds) of sugar in 1815. This later would be supplemented with cocoa nuts and bananas. The property was later sold to Brimmer, Linder, Vaughn, and finally to Ernest Smatt, who owns it today.

The house is a single story building with glass louver windows and cooler boxes. The structure has high ceilings, polished wooden floors and a wide verandah. The Great House is furnished with original pieces and boasts an exceptional collection of antiques with polished fittings. The floors, ceilings and windows are constructed of native hardwood skillfully hand constructed. There is a master bedroom with a private study and three other bedrooms, a living room and a modern kitchen added. The out-buildings consist of storage sheds, household servant’s quarters, two kitchens (one for the great house and one for the servants), stables, and a bar where the owner would entertain his male friends. The groom was required to saddle horses for his master and mistress every morning in the event they wanted to ride. If they decided they didn’t need a horse, he was told and he could then remove the saddle and other riding gear.

Michael Lawton, who is the general manager of the estate, remembers his father working on the estate when Major Douglas John Vaughn owned the property. The help never approached the great house and as a boy, if he ever got near the house, his father would have been fired. All field hands met the overseer at the bottom of the hill. He remembers when the owner rode through Bailey’s Vale; the people would rise and salute him as he passed. Every year end, the Vaughn’s would kill a bull and throw a big feast for the community.

The Hon. Benjamin Hume (1700-1773). Merchant, Planter and Politician in 18th Century Jamaica. He was a very wealthy Merchant in Kingston and was also a Member of Assembly for Port Royal in the House of Assembly of Jamaica from 1735 to 1736. He was made a Member of the Privy Council in 1745 and in 1746 he was appointed Receiver-General of Jamaica. However on the 27th of October, 1753, Hume was dism…issed from that office and his seat in the Privy Council by the newly arrived British Governor, Admiral Sir Charles Knowles, after it was discovered that he had secretly “borrowed” over 20,0000 pounds sterling from the Public Treasury and was unable to pay it back. Hume was forced to declare bankruptcy and was publicly censured by the House of Assembly of Jamaica, but somehow managed to escape Trial and Punishment for this flagrant embezzlement. He had previously married a rich widow, Mrs. Elizabeth Halse, wife of the late Thomas Halse III (1699-1737) of Halse Hall Estate (see my Halse Hall post), a large Sugar Plantation in Clarendon, and he subsequently used her money to become the business partner of the Hon. Zachary Bayly, Custos of St. Mary. Hume went on to become a successful Sugar Planter and on his death in 1773 he left his entire fortune, which included two Sugar Plantations and a Cattle Estate in Jamaica, as well as hundreds of Slaves, to Bryan Edwards (1743-1800), the Historian, who was the favourite Nephew and Heir of his business partner, the Hon. Zachary Bayly, Custos of St. Mary. From an Oil Painting by an Unknown Artist, English School, c. 1760. Private Collection.

Bryan Edwards (1743-1800). Planter, Politician and Historian of 18th Century Jamaica. He was born in Westbury, Wiltshire, England on the 21st of May, 1743, the eldest son of Bryan Edwards, Esq. and his wife, Elizabeth Bayly. In 1756, when Edwards was only 13 years old, his Father died leaving his Widow and six children virtually destitute. Luckily his Mother had two wealthy Brothers, Zachary and N…athaniel Bayly, who were rich Sugar Planters in Jamaica, and they helped to financially support the Edwards family in England. In 1759, when he was just 16 years old, Bryan Edwards was sent out to Jamaica to live with his uncle, the Hon. Zachary Bayly, Custos of St. Mary, who was a very prominent Sugar Planter and Politician in Jamaica. While in Jamaica Edwards was educated by the a private Tutor from England, the Rev. Isaac Teale, who was an Anglican Clergyman and Classical Scholar. His Uncle, the Hon. Zachary Bayly, also taught him all about Plantation Management and Colonial Politics in Jamaica. In 1769 his Uncle died and left him several Plantations and hundreds of Slaves in Jamaica. Four years later, in 1773, his Uncle’s friend and business partner, Benjamin Hume, also died and left Edwards two more Sugar Plantations and a Cattle Estate as well as hundreds more Slaves. These Plantations in Jamaica included Bryan Castle Estate and Brampton Bryan Estate in Trelawny and Nonsuch Estate and several other Plantations in St. Mary and St. George. Edwards had been elected as a Member for St. George Parish in the House of Assembly of Jamaica from as early as 1765 and he represented St. George, St. Mary and Trelawny at various times in the House of Assembly of Jamaica over the next 30 odd years. After a five year sojourn as an Absentee Proprietor in England from 1782 to 1787, he returned to Jamaica in 1787 and moved from St. George and St. Mary to Trelawny. He built Bryan Castle Great House, near Rio Bueno, in Trelawny between 1787 and 1790 and made it his principal residence. Edwards subsequently wrote most of his celebrated History of the British West Indies in his upstairs Library at Bryan Castle Great House. From its window he would have had a panoramic view over the foothills covered with cane-fields, pastures, pimento groves and woods all the way down to the blue Caribbean Sea far below in the distance. The 18th Century mahogany Chippendale desk, on which he wrote most of his History, was donated to the Institute of Jamaica in 1932. (In the 1970s it was said to be “on loan” to a Minister in the Manley Government and has since disappeared). In 1792 Edwards left Jamaica and returned home to England to live there permanently.He settled in Southampton, where he became a successful West India Merchant, and in 1793 he published his famous “History, Civil and Commercial, of the British Colonies in the West Indies”. He also went on to write and publish several other Books and Pamphlets. After having twice stood for election for Parliament in England unsuccessfully, Bryan Edwards was finally elected as an M. P. for Grampound in Cornwall in 1796 and he held that seat until his death four years later in 1800. While he was an M. P. in the House of Commons, Edwards was a leading Spokesman for the West India Interest, a vocal defender of Slavery and a bitter and powerful opponent of William Wilberforce and the Abolitionists. He died on the 6th of July, 1800, at The Polygon, his country house near Southampton, aged 56. In 1774 Bryan Edwards had married Martha Maria Phipps, the daughter of Thomas Phipps, Esq., High Sheriff of Wiltshire, of Leighton House, near Westbury, Wiltshire, England, and their son, Zachary Hume Edwards, Esq. inherited Edwards vast fortune including his Estate in England and also his several Plantations and hundreds of Slaves in Jamaica.This Portrait of Bryan Edwards, an Engraving of which was published in the Frontpiece of his History of the British West Indies, descended in the Bayly family in England until it was just recently sold at Auction at Bonham’s in London in December, 2010. From an Oil Painting by Lemuel Francis Abbott, c. 1794. Private Collection 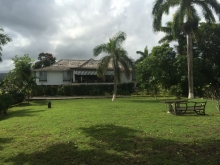 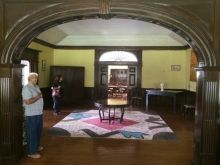 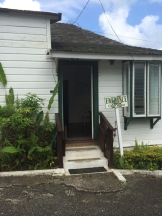